Skip to content
The Qatar National Convention Center was very busy today, Friday. I discovered flexible and innovative and comfortable furnitures – made of cardboard. They were popular and in heavy use. Check out all the pictures.
COP18/CMP8 President, His Excellency Mr. Abdullah Al-Attiyah had invited to an Open Dialog with Civil Society. The 1 1/2 hour dialog was the longest with Civil Society to be held at a COP conference. The president spoke from his heart when he pledged to strengthen relationships with NGOs. His expectations of the conference are to deliver a successful conference, the first COP in the Middle East, that delivers direct results for the public.
The environmental NGOs acknowledged and recognized that Qatar has shown great courage to host COP18 but also expressed the hope that Qatar will make a pledge toward emission reductions. The president mentioned that a national plan and strategy is already under way to produce desalinated water with renewables by end of 2013 with a longer-term plan to be delivered then. He said that Qatar needs to facilitate a marriage between the energy sector and the environment but acknowledged that a marriage can not be forced. Qatar is an energy country. Energy is Qatar’s resource. It’s a gift  of god and we need to protect this country to live in this country. Nobody wants to go back to 1950s when there were no public schools in Qatar and 30% of women died in child labor.
There was great enthusiasm to the question about traditional knowledge by the indigenous people NGOs. Traditional knowledge lives with us and is not something of the past. Some problems of today exist because we did not take wisdom from the past and applied it. Traditional knowledge was cascaded from generation to generation, has served communities, and must be considered for future as well.
Some top negotiators have expressed great concern over the lack of urgency to combat climate change and suggested that it is often small countries that are most innovative and move quickly to overcome hurdles. What is Qatar’s COP18 Legacy plan? HE Al-Attiyah responded that Qatar has already shown ways to move fast as the only country with a woman president of a major university (referring to Dr. Sheikha Abdulla Al-Misnad, President of Qatar University) but made no further promises.

I dared to ask whether the beautiful recycling bins and smooth bus transportation system can be put to use in Qatar post COP18. His staff later confirmed that a nation wide recycling program was launched in Qatar with the installation of bins in front of the Ministry of Environment and will be expanded on at major drop of points shortly. Fingers crossed.
Regarding private public partnerships, he mentioned that an independent power purchase program is in consideration to feed energy from renewable sources into the grid but also acknowledged that there is great potential when the current level of uncertainty can be overcome.
Next, I went to a discussion on the Role of Bamboo and Rattan for Carbon Sequestration. Bamboo, the fastest growing plant (1m/day up to 40m in 2 months), produces biomass and is of interest for carbon sequestration at comparable levels to other forests. There are 25-50 Mill hectare of bamboo forests worldwide (Asia, Africa and South America) with over 1,200 species. Bamboo regrows after it is cut every 5 years and used as timber in building and construction industry, supporting a wide bamboo industry. China Green Carbon Fund offers carbon credits.
One week into the conference, I am really excited to be part of it and about the potential for immediate impact in Qatar. There is will and sincerity. However, after all the meetings and little sleep I feel a bit cross-eyed. DOHA2012 – UN Climate Change Conference morphed into DOHA2012 – ULTIMATE CHANGE CONFERENCE when I passed by the display screens tonight…. perhaps that’s where SustainableQatar and Qatar Sustainability Network come in, helping to make COP18 the ‘ultimate change’ conference. Our constituency is ready. 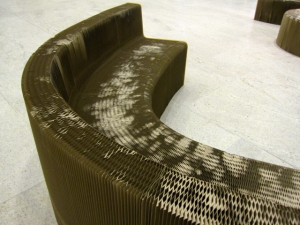 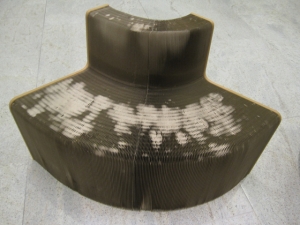